Greg Hatstat fulfilled his dream of climbing a fourteener, despite challenges presented by Parkinson’s disease.

It was 1985 and Greg Hatstat was an active, athletic 32-year-old when he was diagnosed with Parkinson’s disease. As the disease progressed, he would often gaze at Longs Peak and wish he could climb it. He tried three times, and with each attempt, foul weather or a physical limitation would interfere. He finally gave up. Then in 1999, Hatstat became one of the first Parkinson’s disease patients to receive Deep Brain Stimulation (DBS) under the care of Dr. Rajeev Kumar at the Colorado Neurological Institute Movement Disorders Center. DBS is not a cure, but it can help control the symptoms. So much so that at the age of 59, with a 27-year history of Parkinson’s disease under his belt, the Parker resident decided to give climbing one more try. This time, his team of coaches and helpers included his doctor.

“Dr. Kumar has been so supportive of me reaching this dream that he even said he would climb it with me,” Hatstat explains. Mt. Harvard, near Buena Vista, is a very difficult climb. It’s the third-highest peak in Colorado and the fourth-highest in the contiguous United States, rising 4,400 feet in 6.5 miles to a summit of 14,433 feet.”

“Greg had some significant challenges,” Kumar admits. “He freezes when he walks, as if his feet are stuck to the floor, so hiking something of this magnitude was a significant risk. He took significant safety precautions, which was good. I was worried about him getting back down, but he was way ahead of the rest of us. Walking with poles helped with his freezing, his gait rhythm, and kept him from falling. We also had a rope around him during the most difficult parts of the climb. He did really well, and the whole experience was really inspiring.” In addition to Kumar, Hatstat’s fellow climbers were his 20-year-old son, Daniel; his longtime friend and hiking partner, Rick Thompson, a former Marine; two professional guides; and Ron Kubit, president of the CNI board and a member of the team that took the first blind African to the top of Kilimanjaro in 2005. Kubit also walked the Colorado Trail in 2010 and climbed Mt. Elbert with a group of five Iraq and Afghanistan veterans earlier this summer. 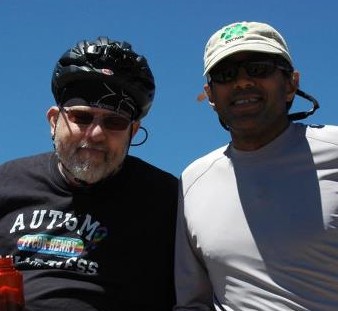 At the age of 59 with a 27 year history of Parkinson’s Disease and so many missed opportunities, Greg Hatstat decided to give it one more try.  This time, his team of coaches and helpers included his own doctor!   “Dr. Kumar has been so supportive of me reaching this dream that he even said he would climb it with me,” Greg explains.   Mt. Harvard, near Buena Vista, isa very difficult climb.  The third highest peak in Colorado and the fourth highest in the contiguous US, the mountain climbs 4,400 feet in 6.5 miles, with an ending elevation of 14,433 feet.

“With the right people, the right skills and the right motivation you can overcome even the worst of conditions,” Hatstat said. “This wonderful group of people gave me confidence and allowed me to drop all my fears and put my trust in them. With every step came more pain and more difficulty controlling my movements, and yet I felt as though I was being lifted to the top of Mt. Harvard by the collective energy of concern, confidence and encouragement.”